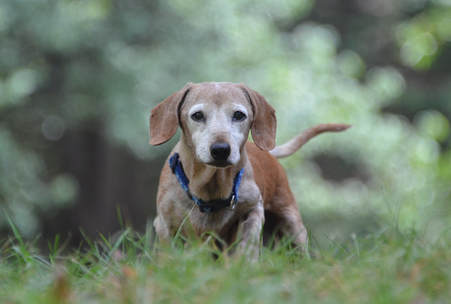 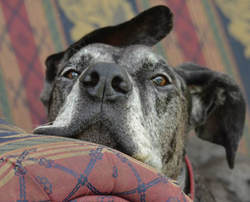 I heard a fable the other day that I loved. It is said that in the beginning man and animal resided together in love and peace. When Adam and Eve sinned, one of their punishments was the great divide that was placed between the two worlds. As the world was dividing it was the dog that looked at them moving away, he was worried about his man and didn’t want him to be alone, so he jumped over the great divide right at the last second so he could stay with man forever and watch over him.

That story warms my heart and makes me believe in the unconditional and total love of a dog. That’s not the dog I got. I suppose that wasn’t the dog I needed.

Frankie was found by Penny Miller at a shelter. She walked in and saw this skinny, dirty, sick Great Dane. Frankie had been tied to a tree for almost two weeks when his family moved away. Penny walked up to him that day at the shelter and couldn’t turn away. Trust me, he has this effect on most women. Even as dire as his circumstances were and had been, he held himself high, fixed his combover just right, and demanded that Penny Miller take him to McDonalds and then home. Once home, the other men in Penny’s life didn’t see the same “Je Ne Sais Quoi” that Frankie put down on Penny. They wanted him out of the house immediately.
​
Penny re-homed Frankie. My boyfriend at the time wanted a Great Dane to play with my Great Dane. We saw an ad on craigslist and contacted Penny. When she brought Frankie over I could see right away that it was love at first sight!! Milan (my other great dane) and Frankie were seeing stars. To cut down on a long story from this point, I got rid of the boyfriend and felt that Frankie was a much better match for Milan and I. Frankie came to live with us. The love between Frankie and Milan was epic! It is truly the only woman he has ever loved. She would boss him around and walk all over him yet he always was by her side looking to play and comfort her. 2 years ago on Valentine’s day Milan died. I am so glad they had that time together.

Frankie has changed the lives of many. Personally….I had to buy a new house, as he demanded more room than a condo. I had to buy a bigger bed, since dog beds were no longer acceptable forms of comfort. A new truck, since the back seat of the car didn’t allow him ample room to stand nor parade around…image is everything to him. I had to learn to cook and organize his meals, since anything other than home-made wasn’t food. I have had to learn to stay home since being bored and not entertained is something Frankie does not put up with….I will leave the details of his temper tantrums out :)

As I write this I realize I sound like the crazy cat lady, except with a dog. I agree. I’m crazy. I bought what Frankie was selling hook, line and sinker.
I have never met a dog so self consumed. He has never asked me to love him or feed him or change the world for him…Frankie never asks….it is just expected. He demands…and yet each time I cave I question how he has such control! Let me be frank about Frankie..I’m not his only groupie. It is because of Frankie that we started Frankie and Andy’s Place. Had it not been for his self strength and entitlement we wouldn’t have risen to the occasion. He evokes in people a need to rise, a need to please, and a need to do more. We do more for him and because of him.

It was really never a question of if we would do something for Frankie, we all just asked ourselves what we could do for Frankie that is fitting for such a life force. This is a dog that has moved the hearts of many. A community has grown in his presence and for his honor. It keeps evolving into so much more than any one of us. It is growing to making changes where great changes are needed. It has crossed that great divide that man’s best friend initially jumped and is helping both man and dog to heal from so many wounds. Frankie found the strength to not only survive during hard times but to thrive and command a small group of individuals that are working to create a large and meaningful change. There is a general consensus that Frankie is the most handsome douche bag any of us have known. I guess it’s true, I'm in love with an douche bag, that has somehow enchanted the world and changed the community that he lives in for the better. 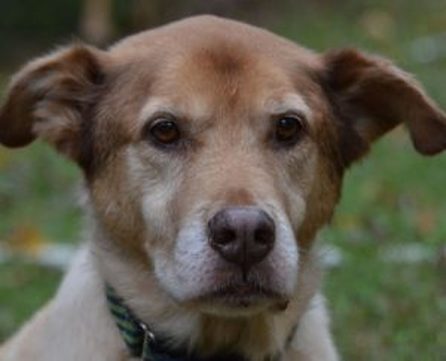 ​Andy was perfect from the time he came into this world, in June of 2000, until the time he left us on February 13, 2016. He was well-rounded, well-traveled, and well-spoken. Maybe he didn’t say much, but you knew exactly the message he wanted to relay in the way he spoke with his eyes. Usually, that message was “give me more food”, but he also knew how to show so much love with those eyes. Those eyes followed everything that happened. He knew exactly where his people were at all times, and he knew how to get their attention.

He got my attention when we rescued him from the town of Franklin, in North Carolina. He was new to the shelter, they didn’t even have him in a crate yet. He was running around playing in the water bowls because he loved the water so much. The shelter, the Humane Society, called him “Waterboy” until they could think of another name for him. They didn’t need to because I took him immediately. Of course, it would be weeks before I would be able to come up with the perfect name for him, Andy. And actually Andy is an acronym, for No Name Dog (N.N.D, said over and over again, eventually sounded like Andy—so that stuck!). Trying to think of a name for this little creature was tough! He was so independent and so smart! The first day I brought him home, I put him in my workshop behind the house while I went to work so that he would have room to run around. I didn’t want to leave him in a crate and the yard wasn’t fenced in so I figured that was the best place. When I came home a couple of hours later, he was sitting on the front porch of the house, just hanging out waiting for me to come home. I couldn’t believe it—he figured out how to open the windows of the workshop (they latched and would swing out from the bottom to open). But I was super happy he didn’t run off! So when I had to leave again for work, I put him back in the workshop and made sure to latch the windows so he wouldn’t escape. That didn’t last very long, because when I came back home a couple of hours later he was sitting, again, on the front porch waiting for me. I realized then he was letting me know that he was smart enough to know where he wanted to live and that he wasn’t going to run away. From that day forward, he had the run of the place. I lived on a several acres next to the Nantahala National Forest, so he played and ran the mountains and bounded up them like a deer, chasing squirrels and bunnies (I like to believe he never caught one) and swallowing the frogs from the pond (He was perfect, but he was still a dog…). The only days he didn’t play outside were the days I wanted to take him to work with me, usually a couple of days a week. I had a sales route, and he would sit in the front seat and ride with me to my accounts. The clients loved him too, often inviting him in to sit in their office while I did my work for them. He even trained them to make sure they had plenty of treats for his visits.

After Andy and I moved to the city in 2005, he quickly adjusted to condo life and spending much of his time napping on the couch. He had a good puppy-life for several years, so he was ready to settle down and relax. He still kept busy by running in races with me (10ks and 5ks), and traveled the country with me. Our first year in Atlanta, we drove across the country to Denver and did some hiking, and then drove the northern states on our way back. His favorite though were trips to Florida where he got to run and play in the ocean. He was always happy being a beach bum, forever a “waterboy”.

Andy was my constant companion, my loyal confidant. He stayed by my side through everything, all the way to his passing early in 2016. Even with his passing, he was perfect. We woke up, walked over to his food bowl (his favorite thing) for breakfast, and he wobbled and fell over. That was it. He was gone. But he didn’t suffer, he didn’t have me make any tough choices about needing to put him down, he just passed quickly and quietly and without any drama.

Andy left his mark on my heart and my life, my most prized “possession” ever. But he also got to put his name on the senior shelter, Frankie and Andy’s Place. What an honor that he gets to welcome other seniors to his cabin. Andy is buried out front of the cabin, and his tombstone is a small reminder of how much we loved “Mr. Perfect”.